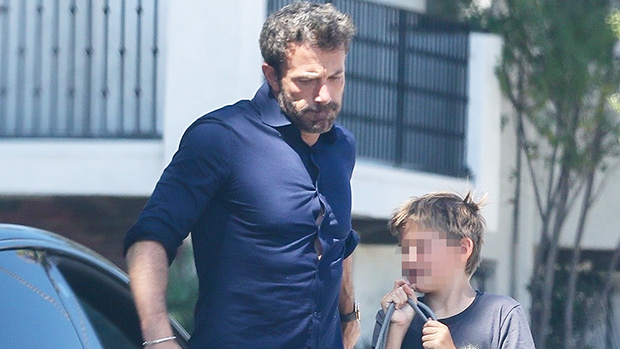 Ben Affleck was photographed out and about with his ten-year-old son, Samuel Affleck, on Aug. 30. The dad of three rocked a navy button down and pants, keeping an eye on his only son, who was seen toting a bag with both of his hands. Ben’s other two children — Violet Affleck, 16, and Seraphina Affleck, 13 — were not seen with the duo on the outing.

This father/son quality time comes following Ben’s return from Italy, where he was vacationing with his wife, Jennifer Lopez, after their Aug. 20 wedding. The two spent a week overseas on their romantic honeymoon. They previously eloped in Las Vegas in July and took a trip to France, although they were joined by their children for that vacation.

Ben shares his three children with ex-wife, Jennifer Garner, who he was married to from 2005 until 2015. The exes have remained amicable co-parents since their divorce, with Jen even spearheading an intervention to help Ben get treatment for his alcoholism in 2018. Meanwhile, J.Lo has twins with ex-husband, Marc Anthony.

Ben and J.Lo’s marriage has been 20 years in the making, as they actually first got engaged back in 2002. They were set to wed over Labor Day weekend in 2003, but called off the nuptials just days beforehand. Although they didn’t fully split at the time, their relationship ended by Jan. 2004. It wasn’t until J.Lo ended her engagement to Alex Rodriguez in 2021 that she and Ben reconciled. He proposed one year later in March 2022. This time, they didn’t hesitate to tie the knot, waiting only four months before their intimate Las Vegas ceremony.

Based on the PDA-filled photos from their honeymoon, Ben and Jen are beyond blissfully in love this time around. This is Ben’s second marriage and Jennifer’s fourth.