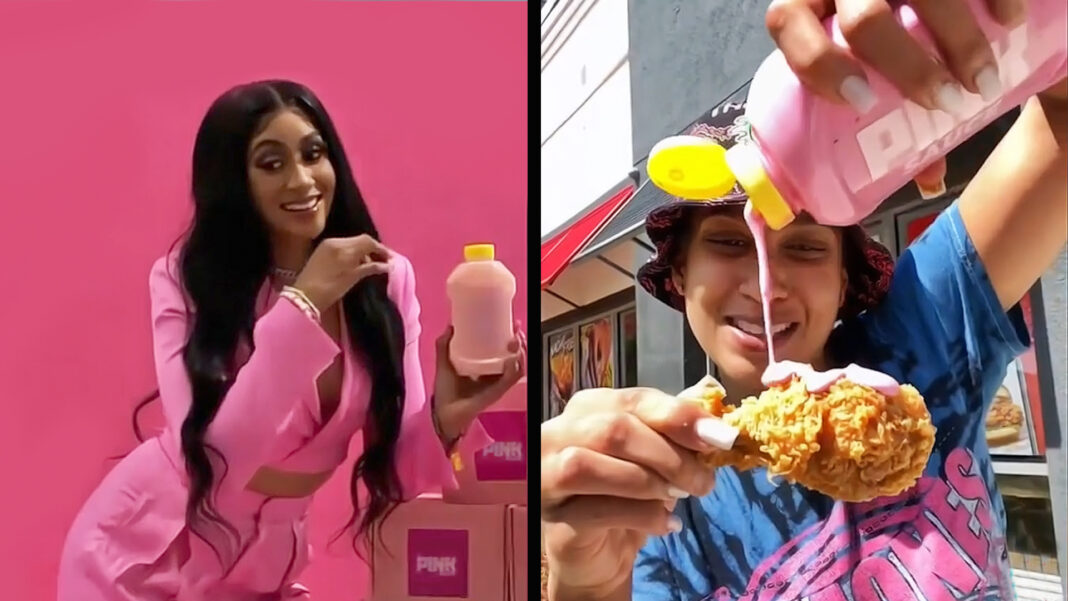 But somehow a few regulatory things got lost in the sauce and sis found herself being called out by customers for botched deliveries, incorrect labeling, and unsafe product conditions.

Some customers even complained of receiving rotten products, and the critics took to TikTok to voice their displeasure.

All of which caught the attention of the Food and Drug Administration (FDA) who placed her under investigation.

In a TSR Investigates exclusive, we catch up with the woman behind it all to get the details on what went wrong and how a major new brand deal might help turn things around. The Shade Room investigates…

“I didn’t expect the demand to be so high,” Pii told TSR Investigates’ Justin Carter.

Chef Pii says she’s been a chef for about four years, and even had her own catering business at one point, however she was forced to close it during the pandemic.

Her friends eventually encouraged her to go public with her infamous Pink Sauce, and after posting a video of the product on TikTok last month, the frenzy for the condiment took off.

That video went viral, with 5.5 million people viewing Chef Pii eat a chicken leg covered in Pink Sauce. She would then follow that up with more videos, applying the condiment to everything from peppers to hot fries and even burgers.

She went on to sell 1,600 units of the sauce during her first production run, all of which was sold within 30 days.

The sauce was not cheap, however, costing $20 per bottle, meaning she made $50,000 in that first run alone.

“I wanted to create a sauce like me, so like crazy, sexy, cool, delicious,” she said of the product. “It blew up before I had time to grow like a regular business.”

The sauce itself is made up of sunflower seed oil, chili, garlic, honey, and dragonfruit, which gives the sauce its distinctive pink color.

TikTok Reviews Prove To Be Mixed, Negative Reaction Over Packaging, Typos, And Price

Then came the reviews on social media. Some of those who purchased the sauce took to TikTok to give their opinion on the condiment, to mixed results.

One woman said it tasted like sweet ranch dressing. Another said it “wasn’t bad, but definitely not worth $20 per bottle.”

The worst of the complaints were about the swelling of the bottle. Some even exploded while in transit, which Pii blamed on using plastic bags when mailing the product.

Pii says there were “literally 50 shipments” that were damaged during her first production run. She says she now uses cardboard boxes to ship the sauce.

Then there were complaints regarding the sauce’s nutritional facts and label. The servings per container amount read a whopping 444, at at 90 calories per serving, that would make one bottle nearly 40,000 calories.

And there were misspellings under the sauce’s ingredient list, too.

She says that she had hired a graphic designer, who she would not name, and had proofread the packaging, but she did not see the typos.

“Maybe I should have gotten four or five people to proofread it,” she said.

When asked about those who have bottles of her Pink Sauce, she said it must be refrigerated after opening, and told them to look for the expiration dates printed on the label.

And she insists that no one has been able to produce concrete evidence that they got sick from the sauce, and argued that people began circulating “conspiracy theories” as to how the sauce went viral so quickly.

Viral Videos Draw Attention Of FDA, Who Launched Investigation Into The Sauce

All that attention drew the watchful eye of the Food and Drug Administration, who launched an investigation into the sauce.

The FDA says it has what’s called a food facility registration that enforces strict packaging criteria, which Chef Pii’s sauce failed to meet.

For her part, Pii says she has no experience in commercial food manufacturing, so she’s starting over.

They have since paused production, however she has partnered up with Dave’s Gourmet, a major food brand known for their hot sauce, and isn’t giving up on her Pink Sauce.

The company said in a statement that it was able to recreate Pii’s sauce while “changing some of the ingredients to make the sauce less complicated, dairy-free, and and clean of any preservatives.”

She added that the sauce is currently in redevelopment to have a two-year shelf life amongst other changes.

Pii maintained her enthusiasm for the product, saying it will eventually be a household name.

She says customers can expect another round of preorders for the updated sauce later this year.