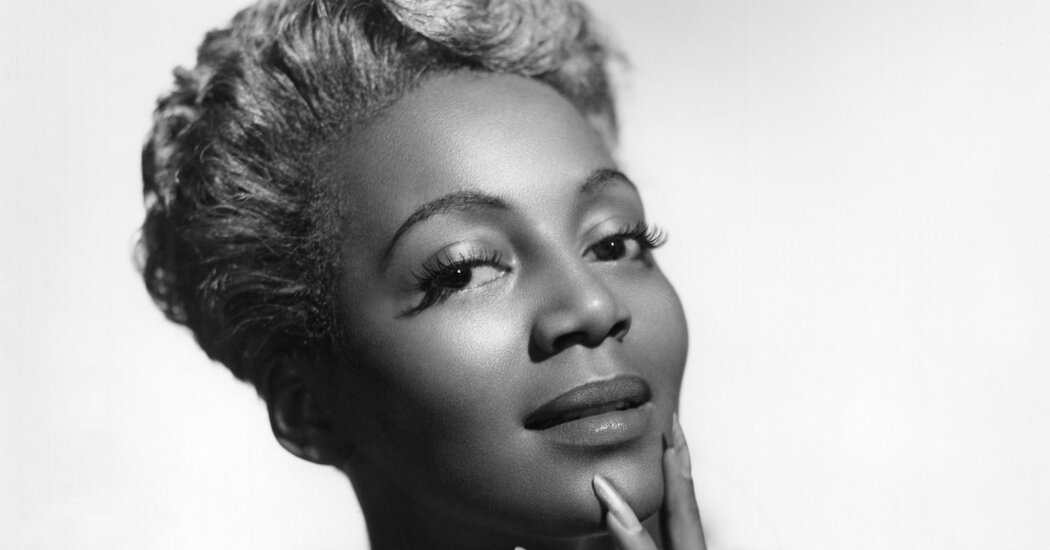 Joyce Bryant, a sultry singer of the 1940s and ’50s who broke racial barriers in nightclubs and raised the hackles of radio censors before setting aside her show business career in favor of missionary work, then reinventing herself as a classical and opera singer, died on Nov. 20 in Los Angeles, at the home of her niece and longtime caregiver, Robyn LaBeaud. She was 95.

Ms. LaBeaud said the cause was Alzheimer’s disease.

Ms. Bryant was a teenager when she first attracted attention on the West Coast with her striking voice and equally striking looks. She started out with the Lorenzo Flennoy Trio — “Can’t just can’t get rid of those chills up and down my spine whenever Joyce Bryant with the Flennoy Trio sings ‘So Long,’” J.T. Gipson wrote in The California Eagle in 1946.

Soon she was appearing regularly at clubs, first in San Francisco and Los Angeles and then beyond. And she was developing a signature sexiness, wearing striking gowns that accented her hourglass figure.

“Many of Joyce’s gowns are created so form-fitting that the singer cannot sit down in them,” The Pittsburgh Courier wrote in 1954. “Joyce has had to develop a glide to move about.”

And there was her hair — silver, thanks to the application of radiator paint. Sometimes she went with an all-silver look: hair, gown, nails. It was a gimmick, she told The Montreal Star in 1967, that had been born of a desire to set herself apart from Lena Horne and Josephine Baker, two top Black stars of the day, at a benefit concert.

“After them, who was going to listen to me?” she said. “I knew I had to do something different.”

The “something different” garnered a long standing ovation, she told The Star. and “I don’t think the audience even heard me sing that night.”

Her look was only one factor in her fame. The other was her delivery, which on certain songs was boldly sensual. Her first record, released on the London label in 1949, was a song called “Drunk With Love” that she imbued with so much sexiness that some radio stations wouldn’t play it. (One in Los Angeles would play it only at night, news accounts at the time said.)

A second release, her version of the Cole Porter song “Love for Sale,” encountered similar resistance.

“Joyce Bryant’s waffles, ‘Drunk With Love’ and ‘Love for Sale,’ are darn good, but you’ll have to take our word,” Walter Winchell, the influential columnist and a Bryant fan, told his readers in June 1953. “Both ditties are banned from networks.”

Her nightclub performances sizzled as well. When singing one number, she would pick out a patron, sit on his lap and give him a bite on the neck or ear or cheek.

“Not a hard bite,” she said in a 2001 video interview with Jim Byers, who is making a documentary about her, “but a little nip.”

In 1952 she was booked into the new Algiers Hotel in Miami Beach, one of the first Black performers to headline in that town. She was advised to tone down her act for the largely white audience, she said, but didn’t.

Her first show shocked the crowd. For her second, she said, she noted a different seating pattern — the men in the audience somehow were all front and center.

“There were all the rednecks and everybody sitting on the aisles,” she said, “hoping to be the one that was going to be bitten.”

But she hadn’t escaped the racism of the day. When she was booked into the Algiers, she said, “It brought about a lot of stuff; it brought about burning crosses and threats.”

Mr. Byers, who has studied Ms. Bryant’s life for decades, said that she engendered strong reactions because she was a dark-skinned Black woman (in contrast to lighter-complexioned Black stars of the day like Dorothy Dandridge) who was openly sensual. Her banned records, he said, had suggestive lyrics but not dirty ones.

“Really,” he said, “the crux of it was that she was an African American woman singing these sensual love songs.”

But in 1955, with her career going well, Mr. Bryant quit show business for a time. She told The Pittsburgh Post-Gazette in 1965 that after her voice gave out during an engagement at the Apollo Theater in Harlem, she overheard a conversation between a doctor and her manager. The doctor advised vocal rest; the manager instead urged him to give her cocaine to get through her shows.

“I said to myself, if a human being can be exploited this way,” she said, “if somebody who is supposed to be guiding your career can be so selfish and greedy, even willing to risk you becoming hooked on narcotics for the sake of the almighty dollar, then I’d better get out.”

She had been raised a Seventh-day Adventist and grew increasingly ambivalent about her singing career and her sexy onstage persona the more famous she became.

“I felt for three years that I was living a lie,” she told The Chicago Tribune in 1956.

She entered Oakwood College (now Oakwood University) in Huntsville, Ala., a historically Black institution run by the church. She did missionary work and then became a teacher in Washington. There she was encouraged to try opera, and in 1965 she was back on a New York stage, singing the role of Bess in a New York City Opera staging of “Porgy and Bess.”

Harold C. Schonberg wrote in The New York Times that her voice was not quite strong enough for the part, but that he was mesmerized by her acting, calling her “beautiful, lithe, intense.”

“When she made her entrance,” he wrote, “wives in the audience clutched their husbands’ arms. A black panther was on the loose.”

She played Bess in various houses across the country for several years. Then, in the 1970s, she reinvented herself again, performing a more modest pop-and-standards cabaret act in places like Cleo’s and the Rainbow Grill in Manhattan.

“Song by song,” John S. Wilson of The Times wrote in reviewing her at the Cotton Club in New York in 1978, “Miss Bryant’s performance is a masterful display of concept, structure, and a delivery that bristles with vitality.”

Mr. Byers said that in the early 1990s Ms. Bryant, who was living in New York at the time, was walking near Lincoln Center on a sidewalk that was being repaired. She took a fall and was injured, breaking a knee and chipping some teeth.

“That’s when she basically disappeared,” he said, moving back to California and fading into relative obscurity.

Emily Ione Bryant was born on Oct. 14, 1927, in Oakland, Calif. Her father, Whitfield, was a chef for the Southern Pacific Railroad, and her mother, Dorothy (Withers) Bryant, was a homemaker.

Ms. LaBeaud, her niece, said that Ms. Bryant’s grandmother used to remark that her granddaughter’s singing around the house brought joy; “joy” became “Joyce,” which Ms. Bryant began calling herself.

Ms. Bryant’s career got started when she and some friends were visiting Los Angeles and went to a nightclub where the entertainer was leading an audience singalong.

“All of a sudden she realizes that no one else is singing but her,” Mr. Byers said. Her arresting voice got her paired with the Flennoy Trio and, Mr. Byers said, also got her a film role as a nightclub singer in the 1946 George Raft movie “Mr. Ace.” But, Mr. Byers said, she was shown only in fleeting glimpses, and subsequent scenes in other movies were cut entirely, which he attributed to Hollywood’s racial constraints at the time.

She appeared regularly at nightspots like the Club Alabam in Los Angeles, then received a career boost when Pearl Bailey, appearing at the West Hollywood club Ciro’s, became ill and she was brought in to complete the engagement. That got her a booking at Bill Miller’s Riviera in Fort Lee, N.J., just outside New York, in the summer of 1951, where Mr. Winchell saw her and became a fan.

Ms. Bryant is survived by a brother, Randolph.

Mr. Byers said that Ms. Bryant remained relatively unknown because she did not fit show business molds — first as a glamorous Black nightclub singer when that was not common, then as someone who turned her back on fame.

“What has always fascinated me about Joyce’s career,” he said, “is what it says about the machinery of popular culture.”