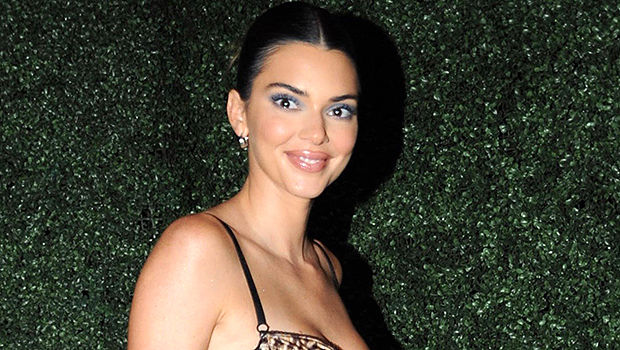 Supermodel history! Kendall Jenner stepped out in a vintage Dolce & Gabbana dress once worn by the one-and-only Gisele Bundchen. The 26-year-old looked sensational in the slip style number with the image of a robot that Gisele, now 42, debuted at D&G’s spring 2001 show in Italy. Kendall was spotted in the dress, which included a subtle leopard detail up top, as she exited a vehicle and headed into sister Kylie Jenner‘s Ulta Beauty party.

Kendall paired the D&G dress with a strappy black sandal and sparkly purse, both by designer Alexander Wang. She kept her brunette hair back into a center parted bun, channeling Y2K along with her blue eyeshadow and small silver hoop earrings. The Calabasas native kept her manicure neutral with a nude polish, which she showed off as she held her blue iPhone in her right hand.

The runway star has been spotted in Dolce & Gabbana several times in recent months, including at sister Kourtney’s wedding to Travis Barker earlier this summer. The entire family was outfitted in iconic designs from the legendary designers, including Kenny who opted for a tight nude floral gown for the actual ceremony and reception! She hilariously struggled to make it up a steep staircase in the ensemble, which was captured on video by her younger sister (which was, of course, shared to social media). The bride also sported a white mini dress from the label.

Kylie’s party was in support of the launch of Kylie Cosmetics at Ulta Beauty in the Los Angeles area of Westwood, as well as the drop of her new Lip Plumping Gloss. The 25-year-old billionaire invited her parents Kris Jenner, 66, and Caitlyn Jenner, 72, and sisters Kendall, Kourtney, 43, Kim, 41, and Khloe, 38, to mark the occasion, as well as friends Olivia Pierson and Natalie Halcro. The mom-of-two (who also had daughter Stormi, 4, with her at the soirée) also looked fabulous in a white mini dress with a corset detail, matching pumps and a lipstick shaped clutch by Judith Lieber.

Previous article200 Greatest Dance Songs of All Time – Do You Agree? My House Radio | House Music Broadcasts from all over the World! MyHouseRadio FM
Next articleUthando (Original Mix)