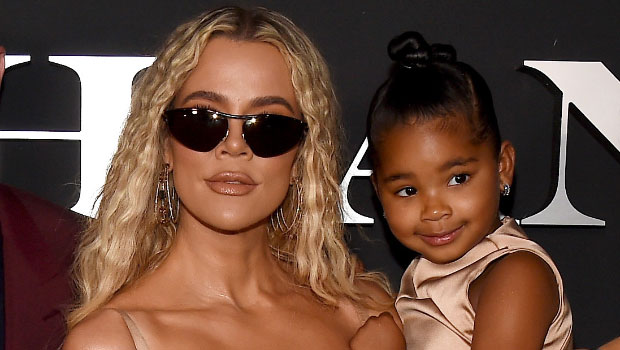 True Thompson, 4, has been filled with joy since her mom, Khloe Kardashian, 38, and dad Tristan Thompson, 31, welcomed her little brother into the world, via surrogate, on August 5. And now, HollywoodLife has EXCLUSIVELY learned just how the toddler is coping with the family’s newest addition!

A source close to the Kardashian family told us that True, “has been so excited to have a baby brother and has been trying to help out with everything. She doesn’t want to leave his side and she is constantly giving him kisses and hugs.” The source also added that, “Khloe thinks it is so beautiful to see how True has taken over the big sister role on this and she is relieved to see that there are no jealousy issues from True, as she was worried about that.” And the source credited True’s patience and “practice” with the new baby from having “smaller children and babies [around] because of her cousins.”

The insider also revealed that, “True has been so excited every single day and both Khloe and Tristan are in awe at what a wonderful big sister she is and how attentive she is. This has only changed their family dynamic for the better.” And it is such good news that True is happy with her new baby brother, as Khloe has been wanting a second child for years. The KUWTK star even wrote about giving True a sibling back in October 2021, via a Twitter comment. Khloe wrote, “Hehehe I want her to have a sibling. If it’s Gods plan.”

A separate Karjenner insider also explained how the new big sister is gentle with her brother. “Khloe has seen another side of True with her baby brother and it’s the cutest thing ever. True understands the difference that this is her brother and She’s so calm and sweet with him. True always approach him with extreme gentleness so she doesn’t hurt him.”

True also spends “as much time with [the baby] as possible” and is said to be “always asking her mom if she can hold him in her arms.” And while True is absolutely overjoyed, the insider explained that Khloe’s son’s birth is “a dream come true” for her and that she “couldn’t be more thrilled.” The new transition for the Kardashian-Thompson family was also “seamless”, per the insider.

Khloe and Tristan’s baby boy is their second child together, and his birth comes just a little over a year after the couple’s split. They split in June 2021, and following their breakup Khloe and Tristan decided to have another child together, via surrogate. It was during the finale of The Kardashians on Hulu, that Khloe’s older sister, Kim Kardashian, 41, broke the news about Tristan’s paternity lawsuit. During this time, Tristan admitted to having sexual intercourse with another woman, to Khloe over the phone. Since the nasty split, Khloe has been single and focusing on her family.

Previous article"The Duchess I Must Be" Song Clip 👑 | The Loud House Movie | Netflix After School
Next articleMizo House Renovations: E1