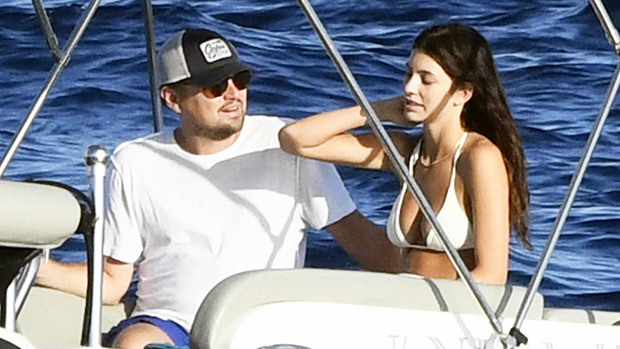 If it feels like every few months, Leonardo DiCaprio is dating a new supermodel — it’s because that’s literally the case. Leo is most recently dated 25-year-old model Camila Morrone, who is officially less than half his age. In the last decade years alone, Leo has been linked to at least a dozen different models. For instance, before Tom Brady and Gisele Bundchen became the unstoppable couple that they are, she dated Leo! And let us not forget that back in 2011, Blake Lively and the Titanic star were romantically involved together. But that’s just the tip of the iceberg (all puns intended). Check out Leo’s past loves.

Bridget Hall marks the first in a long line of supermodels linked with Leo. The two were first romantically connected in 1994, just as his career was starting to take off. However, she told New York magazine that “nothing happened” between them. Her modeling agent also shot down talk of their romance, per E! News: “I remember him. He was such a twitty little guy. They were friends, this is so so not true.”

Kristen Zang – an actress whose career included parts in All My Friends Are Cowboys and the 2000 movie Love & Sex – was involved with Leo for roughly two years in the mid-’90s. He brought her to the 1996 premiere of Romeo + Juliet, but they eventually called it quits in 1998. The rumor is that she dumped him due to his immaturity at the time, per the New York Daily News.

The story in Leo lore is that after Titanic made him a worldwide superstar in 1998, DiCaprio allegedly saw Amber Valletta in a magazine. As the story goes, he was so smitten with her that he had his reps track her down. The two had a reported fling that year, per Pop Sugar.

Another supermodel that Leo was romantically linked to was Naomi Campbell. She and Leo supposedly had a brief romantic rendezvous after Titanic’s success, per Us Weekly. Afterward, the two managed to stay close friends.

From 2000 to 2005, Gisele Bündchen and Leo were the it couple. The two accompanied each other to high-profile events. Gisele accompanied him to the 2005 Academy Awards, turning heads as they walked across the red carpet. As to why Gisele decided to walk away in 2005 – she touched upon it in her book, Lessons: My Path to a Meaningful Life, and in an essay for Porter magazine.

“No longer numbing myself with smoking, drinking, and too much work, I was becoming more and more aware of things that I’d chosen not to look at,” she wrote. “Was I alone in wanting to do some serious soul-searching while he stayed the same? In the end, unfortunately, the answer was yes.” Gisele has since married Tom Brady and started a family with him.

Leo and the model Bar Refaeli began their on-again/off-again romance in 2005. For the next five or six years, the two broke up and made up many times. “I worked on myself [and] I grew up,” Refaeli said. “I didn’t know what ‘alone’ was like,” she said in a 2009 interview, per E! News. “Today, I know that a relationship can work only if you know you can be alone and you are not afraid. Today I’m not afraid of being alone.” The couple reunited in 2010 and sparked engagement talk, but by the end of the year, they had split for good. In 2020, she welcomed her third child with her husband, Adi Ezra.

During a six-month break from Bar Refaeli in 2009, Leo reportedly struck up a short-lived fling with model Anne Vyalitsyna. The couple allegedly met during a trip to Ibiza, and Pop Sugar shows a photo of Leo drinking next to her and another unnamed babe in a bikini.

In 2011, Blake Lively met Leonardo DiCaprio aboard Steven Spielberg’s yacht in Monte Carlo for the Cannes Film Festival (no, that’s not a madlib.) The two had a brief, five-month relationship that saw them take their love from Venice to Los Angeles to New York City. The split was amicable, and Blake has since gone on to find love with Ryan Reynolds.

Leo spent his 2012 occupied with a new romance. He began dating Victoria’s Secret model Erin Heatherton. The couple’s love went international, with the two being photographed zip-lining in Mexico, going on a walking tour in Sydney, and riding bikes in New York City. The couple split by the end of the year, with Leo’s filming schedule on The Wolf of Walk Street being the main reason for the breakup.

The spring of 2013 brought a new romance for Mr. DiCaprio. He struck up a romance with Toni Garnn, the ninth Victoria’s Secret model in Leo’s dating history. The two lasted longer than most, going all the way to December 2014. They spent multiple tropical holidays together during that time, visiting Cannes, Spain, Mexico, and Bora Bora. She rebounded by marrying Alex Pettyfer.

Leo began dating Sports Illustrated model Kelly Rohrbach around April 2015. The couple was photographed riding bikes around NYC that summer. Leo and Kelly also partied in the Hamptons, relaxed in St.-Tropex with their friends, and attended the U.S. Open together. When 2016 rolled around, though, they had gone their separate ways. They reportedly remain friends, and she’s now married to attorney Steuart Walton.

Leonardo reportedly began dating Danish model Nina Agdal – who is 17 years younger than DiCaprio – in the summer of 2016. The two were seen vacationing in Montauk, New York, and the Bahamas together. Despite the heat, their relationship cooled off, and at the start of 2017, their romance was no more.

Leonardo and Camila Morrone first sparked dating rumors in 2017. The model/actress is 25 years younger than Leonardo. Despite the age difference, the couple made it work for a period of time. The two traveled the world together, and in 2020, they adopted a trio of huskies. By Aug. 2022, however, it was reported that they had split. Sources told PEOPLE that the once smitten couple parted ways but there was no indication as to why. The last time they were publicly spotted together was on the Fourth of July weekend in 2022. They were photographed at a beach in Malibu, CA.

Everyone wants a piece of Leo. Tiffany Haddish admitted that she once propositioned Leo. “Yeah, I met him at a party two, three months ago, and I asked him if he’d let me hit that,” Haddish told The Hollywood Reporter. “He’s like, ‘Tiffany, you’re so funny.’ I’m like, ‘I’m serious.’ And then he goes, ‘I mean, I’d do it, but …’ I was like, ‘Come on, wasn’t you in a squad? The coochie squad or something?’ I told him, ‘My only stipulation: I wanna do it with you as your character in What’s Eating Gilbert Grape.’ He starts bustin’ up laughin’. ‘Why?’ he asks, and I say, ‘Cause I feel like that performance deserves a real reward and that reward is this (gestures at her own body).’ “