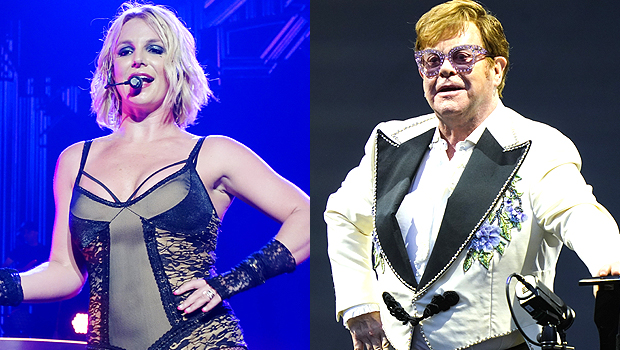 Britney Spears began her music comeback on August 26 with help from a fellow living legend. Britney, 40, joined Elton John for “Hold Me Closer,” the long rumored remix of his 1971 hit, “Tiny Dancer,” and fans went wild when it dropped at midnight. This new version was everything they expected and more, with an infectious techno infused beat and Britney’s signature warble throughout.

“Saw you dancing out the ocean/Running fast along the sand/A spirit born of earth and water/Fire flying from your hands,” the pair sing in unison off the top. Towards the end of the track, Britney belts out “Hold me closer,” proving she’s still got those iconic vocals.

“Hold Me Closer” marks Britney’s first new music since December 2020, when she teamed with her fellow ‘90s icons, Backstreet Boys, for the song “Matches.” The song coincided with the re-release of her 2016 album, Glory (which included “Mood Ring” and “Swimming in the Stars,” one song that was unreleased from the Glory recording sessions and one song initially put out as a bonus track on the Japanese version.) Beyond that, Britney’s music career has been quiet since Glory, an issue she brought up around the end her 13-year conservatorship.

“I wanted to be nice but what they did to my heart was unforgivable!” Spears wrote in a December 2021 Instagram post. “I asked for 13 years to perform new songs and remixes of my old songs. … I had two months off in between each show settings for four years in Vegas. … and every time I asked, I was told, ‘No’! It was a setup to make me fail, yet I knew exactly what I wanted my fans to see.” Britney also write that it didn’t make sense how “network television shows are showcasing my music with remixes…yet the person who owns the music is told No!!!! They even gave remixes to my sister [Jamie Lynn Spears] but why was I always told no?”

“So much wasted time to only embarrass me and humiliate me and I guess it seems odd to most now why I don’t even do my music anymore,” she added. “Not doing my music anymore is my way of saying ‘F-ck You,’ in a sense when it only actually benefits my family by ignoring my real work.”

Jason Alexander: 5 Things To Know about Britney Spears’ Ex That Crashed Her Wedding

Britney’s conservatorship ended in November 2021, two months after she formally filed a request to “immediately terminate” the 13-year legal arrangement that stripped away her autonomy. “I have an IUD in my body right now that won’t let me have a baby, and my conservators won’t let me go to the doctor to take it out,” Britney said in one of the two hearings where she testified against the conditions of her conservatorship. “All I want is to own my money… and for this to end… and for my [then-boyfriend, now husband Sam Asghari] to be able to f-cking drive me in his car. And honestly…. I want to be able to sue my family,” she also said. “I truly believe this conservatorship is abusive.”