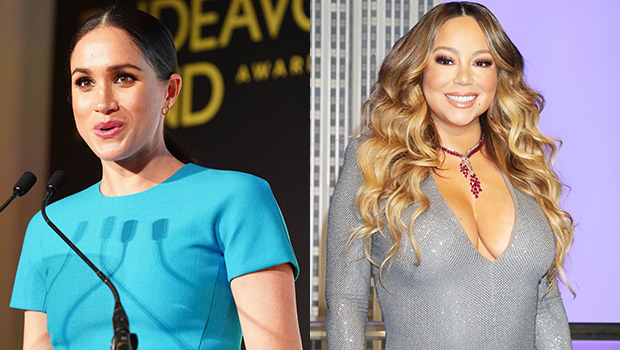 Mariah Carey has been labeled a “diva,” for much of her career, and she opened up about wearing that title proudly during an appearance on Meghan Markle’s Archetypes podcast on Tuesday, August 30.  When Meghan, 40, asked Mariah, 53, whether she considered being called a diva a “compliment or criticism,” the singer responded that she thinks of it as “both.” She explained the duality of it being both a good and bad thing.”People take it as a compliment now—some people, and then some people take it as, ‘Oh she’s such a diva,’” she said on the podcast.

Mariah explained that she understood the origins of the word diva, which can be found in the realm of opera, because her mother was an opera singer. “I know the origin of the word, but then I know as I was growing up like I said, my mom was going, talking about a friend or something: ‘So-and-so is very much the diva.’ I didn’t know if that was bad [or] good—that’s how she spoke,” she said. “It’s very much the grandeur of it all is what I envisioned.”

Meghan also asked Mariah about if she played into being labeled a diva, occasionally as a “defense mechanism,” and the singer agreed, but she also revealed that occasionally she does so “for laughs,” before the two spoke about Mariah’s iconic appearance on MTV Cribs. Towards the end of the chat, she said that part of the reason she’s been labeled a diva was her fashion sense and her “glamorous” outfits. “The diva thing evolved and it continues to evolve, and I play with it. It’s for laughs,” she said. “I’m wearing this because I like how it looks. I don’t care.”

As the “We Belong Together” singer spoke about how the term has changed, she explained that the word “diva” has become a much more casual term in more recent years. “It’s so overused now. Like, ‘she’s the cupcake diva!’ I think they use it as a throwaway adjective,” she said.

Meghan’s podcast focuses on “archetypes” that often get assigned to different women, as the title would suggest, and she speaks to famous women who have often been assigned different labels by the public. Aside from speaking about being called a “diva,” Mariah also opened up about her upbringing and her early career in the interview. Part of why she understood the duality of being called a diva, she attributed to her mom. “I grew up with a real diva,” she joked.