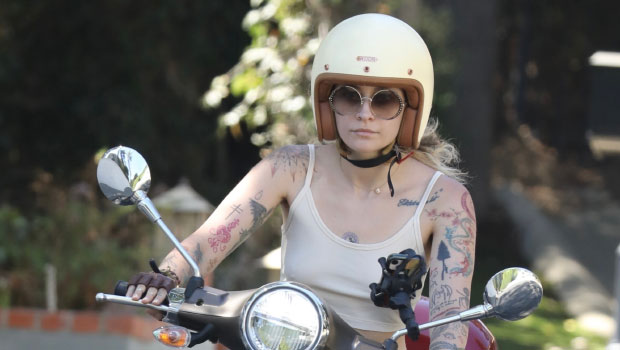 Paris Jackson, 24, knows just how to look effortlessly stylish while riding two wheels! The only daughter of the late singer Michael Jackson opted for a scooter as her mode of transportation on August 31, while out in Los Angeles. Although it was unclear where Paris was headed, she sure looked gorgeous while driving the bike.

Her motorized scooter is a cute chocolate brown color, which matched the singer’s style perfectly. Paris kept her look casual for the daytime journey, as she wore brown pants that were rolled up to her mid-shin. She also color-coordinated her fingerless driving gloves with the bike and her pants. And of course, to beat the sweltering LA heat, the blonde bombshell opted for a crop top tank that revealed her tattooed-covered arms. To tie her look together the songstress also wore a beige-colored helmet, oversized sunglasses, and brown combat boots.

And this is not the first time that Paris was seen riding a cute scooter! Just over three weeks ago she was seen driving a mint-green Vespa while out in Santa Monica, on August 6. This makes it pretty clear that Michael’s second child is a hardcore bike enthusiast.

Paris’s joyride comes nearly two weeks after she was spotted holding hands with her brother, Prince Jackson, 25, on August 19. The famous siblings painted the town red together, as they attended the Harold and Carole Pump Foundation Gala that Friday. The lavish charity event was held at the iconic Beverly Hilton Hotel, where Paris and Prince showed up together.

The “lighthouse” singer was also seen with Paris Hilton, 41, on August 18. The two women with the same name were hanging out at Hilton’s Paris Hilton x Tzuri event in Los Angeles. Both Paris Jackson and Hilton were looking super stylish at the event which was filled with other A-list celebs like Kathy Hilton, 63. At the jewelry party, Paris Jackson wore a cream and green colored loose-fitted dress paired with platform boots, per photos published by The Daily Mail.

Katherine Jackson’s Grandchildren: Facts About Her 26 Grandkids, Including Michael’s Kids

When she is not busy jetting around town on Vespas and partying with other famous celebs, Paris can often be found laying down tracks in the studio. She is not only a model and actress, but a successful singer. Her most recent musical release is the song “Low Key In Love”, which dropped in 2021 with band The Struts.