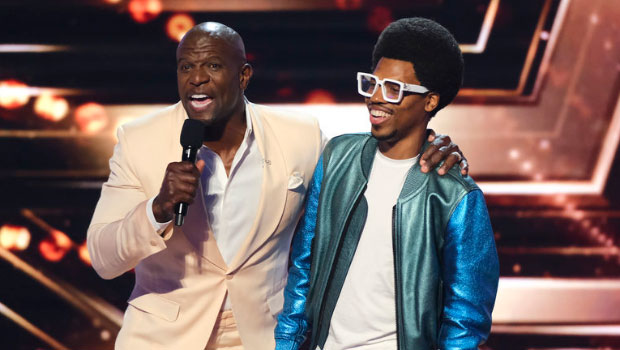 Another 11 contestants hitting the stage mean more eliminations. The latest America’s Got Talent live results show kicks off with an exceptional Riverdance performance. After the special opening, it’s time to get down to business.

Terry Crews calls Merissa Beddows and Bayley Graham to the front of the stage. The first act still in the competition is Merissa. Bayley is the first contestant of the night to go home.

Next, Acapop! and Metaphysic are asked to step forward. America votes Metaphysic into the top 5 of tonight’s results. Between The Lazy Generation and Jack Williams and Harper, Jack makes it through to the top 5.

Heidi Klum’s Golden Buzzer act Lily Meola and Jannick Holste face off next. Lily beats out Jannick for a spot in the top 5. Heidi gives Jannick a standing ovation to send him off.

There’s only one spot left in the top 5, and it’s down to Lee Collinson and Mike E. Winfield. Mike lives to make us laugh another day!

Now the night gets even harder. Terry narrows down the top 5 to the top 3. Mike, Lily, and Metaphysic secure those 3 spots. Merissa and Jack have been eliminated.

Lily Meola: 5 Things To Know About The Golden Buzzer Singer Of ‘AGT’ Season 17

Only 2 acts are headed to the AGT season 17 finals. The first act to have a spot in the finale is Metaphysic! Simon Cowell tells Metaphysic that he’s “thrilled” about having them in the finale because of their truly “unique” act.

It’s down to just Lily and Mike. The second act of the night going into the finals is Mike! Mike is still cracking jokes after his name is called. Mike and Metaphysic will return for the 2-night finale on September 13 and 14.

Even though another 9 acts went home, there’s still a chance for a few select acts. Each judge will choose a wild card act. These acts will compete for the Instant Save, and one act will join the others in the season 17 finale.