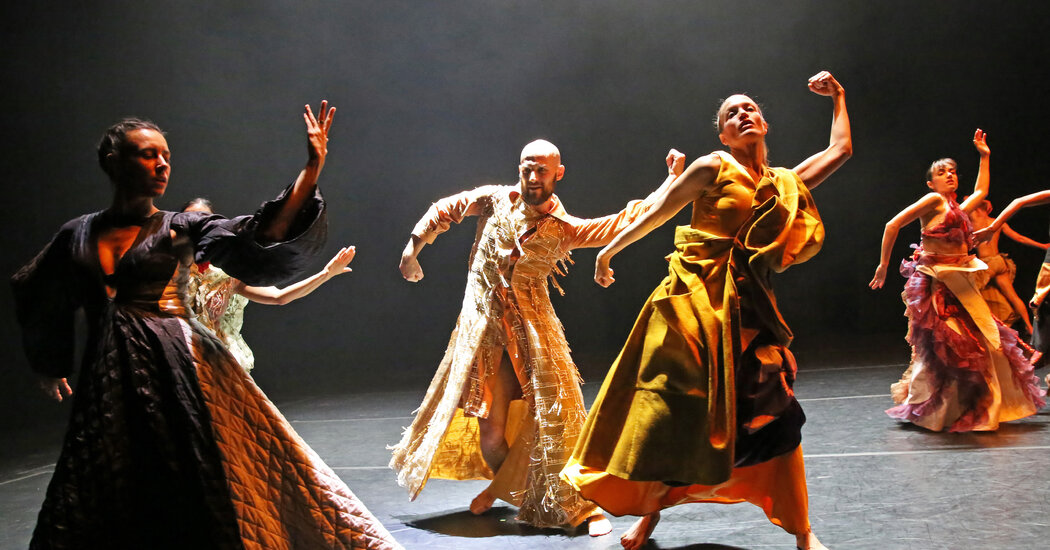 Often, there was push and pull between the rhythm of the music and pace of the dancing; sometimes Gat rejected the beat, and in other moments, embraced it. In one scene, a soloist contorted his body ever-so-slowly at the front of the stage, while a row of dancers were planted behind him, shifting from side to side in a basic step touch while arranging their arms in unison positions: up in the air, one elbow bent, one hand behind the head. It had a certain groove.

But gradually it became clear that there was little beneath the ornate mood-board appeal of “LOVETRAIN” to warrant its length. The dancers’ physicality was arresting as they torqued their backs and torsos, melting onto the floor and swooping back up again with a feverish vivacity. Yet as Gat’s groupings persisted — a trio here, a more concentrated cluster there, a lone dancer running into the center of it all to deliver a little wiggle — the repetitiveness of their high kicks, raveling and unraveling arms and speedy, purposeful walks on and off the stage started to blur together.

The dusky lighting, so startling at first, became increasingly murky. And Gat’s frequent silent sections — initially giving the setting a kind of haunting, heartbreaking poignancy — turned ponderous. In those quiet moments, I yearned for another Tears for Fears song until I realized just how repetitive “Everybody Wants to Rule the World” is. Don’t even get me started on “Shout.” Was this a missed opportunity, or is Tears for Fears music for the elliptical?

But why did this dance happen in the first place? Gat, an Israeli choreographer who formed his company in Tel Aviv — it is now based in France — created it during the darker moments of the pandemic, when audiences needed a release. The world was crying. His musical choice made sense: Roland Orzabal and Curt Smith, of Tears for Fears, met in Bath, England, when they were 13 and living in single-parent homes, according to a program note. They named their band after the concept of primal therapy, which focuses, in part, on repressed emotions from childhood: Tears are a replacement for fears.

As the show progresses, emotions build through the songs’ lyrics and the dancers’ silky, sinuous power, but Gat’s choreographic frame is too tenuous. Dancers, full of finesse and drive but little urgency, travel up and down the same diagonal; they gesture toward the audience with outstretched, beckoning hands. They rarely seem to be dancing on a precipice.

Previous articleReview: A Singer Brings Her Splendid Sound to an Eclectic Recital
Next articleSuspect Arrested in Killing of Takeoff, the Migos Rapper