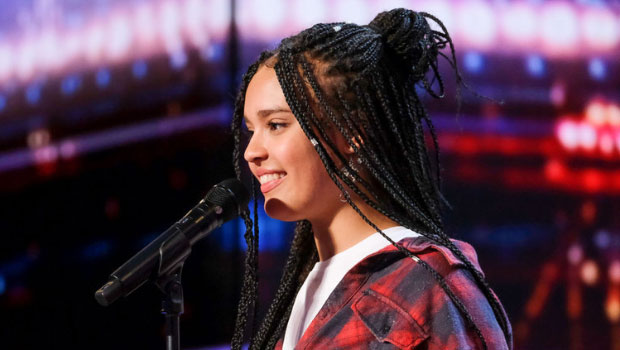 The fight for the finals continues with the third round of qualifiers. MPLUSPLUS is the first act to perform during the August 23 episode of America’s Got Talent. Prior to their performance, the group experienced technical difficulties, and it was unclear if everything was going to go off without a hitch.

Their performance doesn’t appear to have any issues and is quite the color spectacular. “This did not blow me away,” Howie Mandel tells the group. Heidi Klum agrees with Howie and says the act “isn’t spectacular enough.” Simon Cowell wholeheartedly disagrees with Heidi and Howie. “Isn’t that a Vegas show?” Simon asks. Sofia Vergara is on Team Simon.

The adorable singing duo Jojo and Bri return to the stage with a fun performance of Des’ree’s “You Gotta Be.” These two are very cute, and by the end of the performance, they’re in top form. Heidi admits that she wants to “bottle up this vibe” that they’re giving off. Simon reiterates that Jojo and Bri were one of his favorite auditions.

However, he thinks they may have been off-key at times and points out that the end part of their performance was better than the first part. Howie goes so far as to say that Bri is “the star.” He believes if she went solo, she would “go to the stratosphere.”

The Cline Twins up their game big time with their hockey act. They incorporate a lot of movement this time around and get up close and personal with the judges. Sofia loves The Cline Twins because they’re “something we’ve never had on AGT.” Simon echoes Sofia’s praise and says they’re the “best act of the night” so far. “You guys are so puckin’ good,” Howie says.

Amanda Mammana wows with another original song and shines on stage. “What a difference from the shy person we met,” Simon says. Heidi gushes over “the beautiful song,” and Sofia calls Amanda a “very inspiring, beautiful girl.”

Sara James: 5 Things About The 14-Year-Old Polish Singer Who Is A Standout On ‘AGT’

XOMG POP! bring high octane energy to the AGT stage. Simon acknowledges that this group of youngsters knows exactly who their audience is. He personally didn’t like the song, but he loves their energy. Sofia thinks this XOMG! Pop is “more prepared, more in sync” than their audition.

Magician Nicholas Ribs stuns the audience and judges with his interactive act. Heidi thinks Nicholas’ “combo of technology and reality is mind-blowing.” Simon admits that he initially forgot about Nicholas but says this magic act was “one of the best we’ve ever seen.”

Drummer Mia Morris rocks out to an original song for her second performance. Simon admits that he didn’t love the song, but he likes that she didn’t compromise on anything. He calls the performance a “fantastic mess.” Howie thinks that Mia is a rock star but doesn’t believe she’s an amazing singer or songwriter. He feels like she made the “wrong choice” with the song. Heidi defends Mia’s performance and says she always gives everything she has.

Comedian Hayden Kristal comes out swinging with a hilarious stand-up routine. Howie and Heidi can be seen cracking up. Simon gives her a standing ovation. Simon tells Hayden that she “really popped tonight” and has a real “star glow” about her. Howie didn’t get to see Hayden when she auditioned, but he’s highly impressed with her. He thinks she has a “bright future” ahead.

Ventriloquist Celia Munoz takes the competition to a new level with her Grease tribute to the late Olivia Newton-John. She sings “Hopelessly Devoted to You,” and her lips never move. Howie thinks Celia is “very original,” and Simon praises Celia’s “unique” approach to ventriloquism. He thinks she “might be the best act so far.”

Funkanometry brings plenty of charm to the stage, but Heidi is not a fan. “I can’t say that I loved it this time,” she admits. She says it felt like a “middle school talent show.” Sofia agrees with Heidi, but Simon and Howie enjoyed the performance.

The final performance of the night is Simon’s Golden Buzzer act Sara James. The 14-year-old puts her own spin on Elton John’s classic “Rocket Man.” Her rendition is a slowed-down version, and she builds to an amazing climax. The judges give her a standing ovation.

“I am actually very emotional for you right now,” Simon admits. He calls her a “genius” for her song choice. Howie says that was a “winning performance.” Sara is the act to beat!