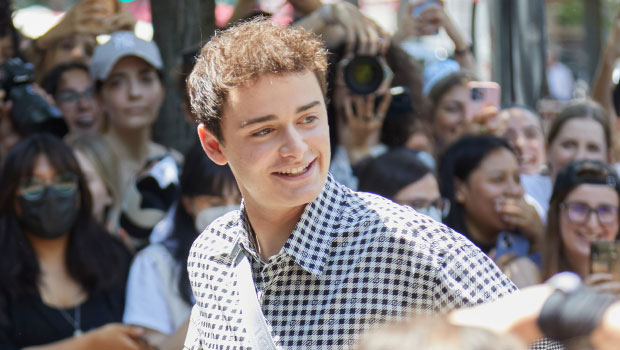 Looks like Noah Schnapp is fitting into his new life as a college student perfectly. The 17-year-old actor, who plays Will Byers on Stranger Things, was spotted kicking off his higher education career at University of Pennsylvania by making a splash at a raging bar party. Surrounded by a group of rowdy students at a local watering hole which features a pool, Noah counted to three before jumping off a wooden bridge into the waters below, as seen below.

The “pool” Noah took a daring dip in is at the Bamboo Bar nearby the college in Philadelphia, according to TMZ. Apparently, the staff at the bar frown upon patrons jumping into the water — which is often filled with debris — and escort those who do out the front door, per the news source. As the establishment is also a restaurant, they allow people under 21 years of age in, thus Noah was able to enter to show off his thrill-seeking stunts.

Noah is clearly enjoying life at his first choice for college, as he and his family were ecstatic upon learning he had been accepted to the Ivy League institution, which he documented in an epic TikTok video on Dec. 17. Noah’s parents Karine and Mitchell Schnapp and his sister Chloe Schnapp joined Noah in congratulatory hugs and jumps when he opened his computer to find out the good news. “#UPENN2026 BABY💙❤️,” Noah wrote in the caption of his TikTok post.

Meanwhile, fans will still be able to fill up on all the sci-fi glory of Stranger Things when the show returns for it’s fifth and final season. Noah and his co-stars Winona Ryder, David Harbour, Millie Bobby Brown, Finn Wolfhard, Gaten Matarazzo, Caleb McLaughlin, Sadie Sink, and more will all be back for the highly-anticipated ending to the Emmy-winning Netflix series.

Previous articleDiRECTED BY ADLEY – a Music Video with Barbie about the First Day of School! "we can dream anything"
Next articleHED KANDI HOUSE CLASSIC MUSIC MIX 2015 by DJ ALEX CUDEYO