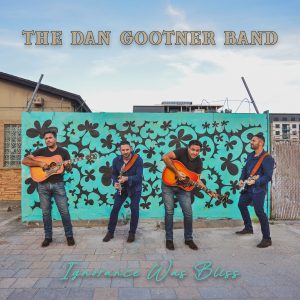 The Dan Gootner Band is the latest project from South Florida’s own Daniel Gootner. It involves an ever-rotating lineup of the best musicians in the area, with different guests from song to song for whatever is called for. Founded in 2020, the band has since explored different genres and avenues of storytelling. To date, 18 songs have been released over the course of several EPs and Singles.

This continues with the latest EP entitled Ignorance Was Bliss. You can listen to the EP here!

The EP rolls into”Bourbon Street” is a slow death of a dream. A young man seeking his fortune, leaving home behind him, and eventually fading into obscurity. Just another junkie vagabond; nameless, faceless, lost in the shadows.

Iao Valley rounds out the project. It is an instrumental pulling inspiration from Eastern, Polynesian, and Western Classical music. Hawaiian Lap Steel, Eastern Tabla and Sitar, and Cello parts weave around each other as your taken to a mystical place. It’s namesake is a place where visitors can find a lush rainforest,in the heart of the West Maui Forest Reserve. When trying to think of a title, and listening back on the track, Daniel felt the music placed him at a calm stream when he closed his eyes. It’s named after Iao Valley which has Iao Stream running right through it. The band hopes this song helps to transport you to your own favorite oasis whenever you listen!

What inspired your latest EP? Tell us some themes.

“Ignorance Was Bliss” was written a long time ago, during a painful phase of growth that was accompanied by the striking realization that I really know nothing at all. And that everything that I thought mattered, really didn’t. It’s about looking into a very honest mirror and seeing myself for who or what I really am, flaws and all. And the words of the song are what my reflection was saying back to me. A total critique. And a sudden awareness on my part of how important it really is to face that criticism.

Who are some of the band’s major influences?

Some of our biggest influences are Tom Petty, Bob Dylan, Eric Clapton, and Steve Miller.

What is your favorite song to play live as a band?

Miracles Can Happen might be our favorite because it has great energy. It gets the crowd going, and singing along. People seem to get behind the message and get into it.

What is next for the Dan Gootner Band?

We’re starting to plan out our release schedule for 2023. We have a lot in the can right now, ready to go. So stay tuned for a lot of new music!

Previous articleWhat It’s Like to Perform in the Met Opera’s ‘Aida’ With No Experience
Next articleBest DJ gift ideas for Christmas 2022.