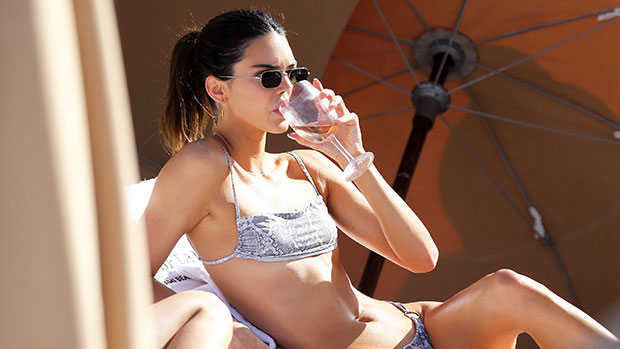 Kendall Jenner is making the most of summer’s last days! The supermodel, 26, was seen in a stunning new Instagram post rocking a classic string bikini as she settled into a lounge chair to soak in the sun and waves at an expansive beach. In the two uncaptioned black and white photos, posted to Kendall’s account on August 30, Kendall wore her hair long and wore a sleek pair of sunglasses to complete the carefree look.

The model’s 255 million viewers were there for the pics and took to the comments section to react. While many fans simply responded with rows of fire emojis or red hearts, others reached out with words of praise for Kendall. “Queen!” commented more than one follower. “LOVE YOU SO SO SO MUCH,” remarked a fan, while another wrote, “Amazinggg.”

Kendall’s wrapping up what has been a very busy summer. She’s been seen bonding with boyfriend Devin Booker, 25, as they left Catch restaurant in Los Angeles, following a highly publicized late June split before reuniting. And she’s been seen out and about promoting her tequila brand 818 with sizzling photos and a star-studded party held at Soho House in Malibu — on August 18, of course. So, it certainly appears that everything is coming together in the model’s favor.

Kendall and Devin, it seems, were always destined to reunite. And now that the reality TV beauty and her beau are back on, it seems Devin is making quite an effort to keep it that way. “Devin made a huge effort to fix things with Kendall almost as soon as they broke up,” a source told HollywoodLife EXCLUSIVELY back in July. “The threat of losing her was a huge wake-up call for Devin. He’s been laser focused on making her happy ever since, it’s like they’re back in the honeymoon stage. Her friends and family are thrilled that they’re back together, everyone would love to see them get married.”

Another Kardashian source told HollywoodLife EXCLUSIVELY for the same report that Kendall’s famous fam is happy that she’s getting the love “she deserves.” “Kendall’s family’s relieved that her break-up with Devin didn’t last because everyone can see how in love they are, they’re a great match,” the source told HL in separate comments. “When they were at Kourtney’s wedding, they spent a lot of time with him and they saw firsthand what a true gentleman he is.”

Kendall Jenner’s Boyfriend: All About Her Ex Devin Booker & Their Heartbreaking Split